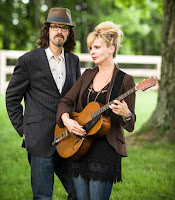 It's Record Store Day and amid the celebrations of all things vinyl & CD, there is the ever present dischord of the difficulty of making a living from music in 2017.

I wrote about Over The Rhine recently, and how difficult it is for people like them to make a living from their music.The financial risk in running a tour in Europe is huge for an independent artist. The costs of travel, and the fact that ticket sales can be a lottery at best mean budgeting a 3 week plus stay is next to impossible.

Allan Holdsworth passed away recently. A guitarist of prodigious talent feted by his peers who copied his style, admired by fans of Jazz & Rock, and who died in a financial position that left his family needing a Go Fund Me campaign to pay for his funeral. The question for me is where were all the fans who have mostly donated about $20, the price of a cd, when he was alive? His recently released compilation is £17 on Amazon. The carelessness of the online stores in pricing is highlighted by the fact that one had his career box set as a download for £6 for a while rather than £60.00. Who suffers? The artist.

I was lucky enough to meet Kim Edgar last year. A Scottish singer with 3 great albums, she was doing a short tour of the Highlands and came to Crianlarich. Her audience? Two. The Reasoning were a highly regarded Progressive Rock band from Wales. One of the factors causing their demise was the imposition of VAT on downloads in the U.K. The accounting costs moved their Bandcamp sales from acceptable to untenable.

Why are we in this position? Is the music not good enough? Hardly. If you don't like any of the above, and please try them, then there are hundreds of other artists who in a better time and place would be selling records by the boatload. Poor promotion? Possibly in some cases, but getting your head above the noise on Twitter is a struggle, the cost of physical product and distribution is a risk too far in many cases. The real answer lies in the culture of the music industry; exploitative for so long and now unwilling, or unable, to make the radical changes needed to move past the short-termism of the X Factor model and nurture artists for rewards in the future. Vinyl won't I'm afraid save the industry, it is a fad, and will fade. CDs still sell to some extent, but digital formats are where the world is going. The major streaming portals need to engage with the industry outside the few remaining major labels to achieve an equitable share out of the revenue. I recognise that they can't deal with every artist one at a time, but working with Bandcamp, CD Baby and their like would bring enough artists into the fold to encourage others to join in. Will it happen? Something has to. Something also has to be done to make music vital to teenagers, as it was in my (long ago) time. How? New music that energises and excites them as happened in the 60's, punk and grunge. We aren't going to find that on reality TV.

Part of my business Selling Service is helping artists find an audience. Talk to me if you want to learn more about getting your message out. tim@selling-service.co.uk