This months RnR Magazine features Lulu on the cover. She's an artist I haven't given much Pod space to until now, which is strange as I'm definitely a fan of her French equivalent France Gall. I did however get her latest 'Making Life Rhyme' on the strength of the videos at her website. Prompted by the article I invested in The Atco Sessions, her go at a Dusty in Memphis, which brought forth two albums at the time and a whole raft of out takes available now. It's good, her voice suits the Muscle Shoals backing and Duane Allman pops up on guitar. 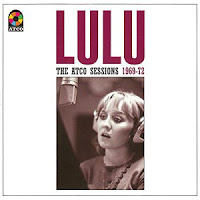 Then I spotted her duets album from 2002 predictably called "Together". There seems to have been a vogue for this sort of thing in recent years but for every Linda Ronstadt "Duets" there are a dozen by artists, whose star is not what it once was, dragging in friends, acquaintances or names from the phone book to perform a list of random covers to stick on the racks in Tesco. Lulu's is hardly the worst of the genre but as she started me thinking about it...

In the credits list Elton John & his partner get fulsome thanks, his duet on Womack & Womack's "Teardrops" leads off the album and is far and away the best production job. The fact that he and Lulu share a label may explain the leg up given to this song. Most of the tracks appear to have been recorded by the team of whoever is buddying up to Lulu on that song with Lulu's vocal sellotaped on top later on. This may explain the mess on tracks two & three. "Shame, Shame, Shame" should be an ideal disco stomper for her to rival Relight My Fire (which closes the album, despite being 10 years old then) but in the hands of Atomic Kitten's producers turns into a twee, affected piece of pop drivel. As for "Inside Thing (Let 'Em In)", I hope this was just a sample of McCartney's original (certainly sounds like it) as it may be the worst thing to bear the name of any Beatle, and no I haven't forgotten "The Frog Chorus".

There are some good song choices "Sail On Sailor" with Sting is creditable, "Now That The Magic Has Gone" with Joe Cocker, but by and large there is little of Lulu on what is after all her album. The whole thing has a hollow feel to it. Elton John is executive producer and it does have the feel of him ringing around a few people to see what spare songs they had which Lulu could be added to. 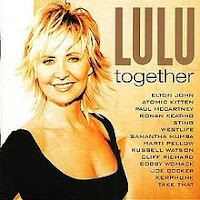 This album will find its way straight back to the charity shop. If you want to catch up with Lulu I suggest the albums recommended above and her 2003 Greatest Hits which has the three best songs from "Together" along with the hits and a DVD which includes performances of some of the "Together" songs from the ITV "An Audience with..." TV show that tied in with the album.


Next time, or soonish at any rate, I will talk Podcasts, any suggestions of good podcasts on any subject would be great.