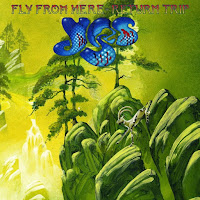 I said last time that I had ordered the rejigged Fly From Here album - Return Trip, and that review would follow. Pledge Music managed to upload faulty files (twice at least). The mp3 files I have show at least one loud "pop" on track 3, and faults on another track that was uploaded to Soundcloud for free download. I managed to reduce the pop to manageable levels with Audacity and am happy enough. Replacements for all files have been promised and were allegedly on line on 2nd May (if so can't find them).

The music? Oh yes! Compared to the 2011 version it is a richer sound, more keyboards, and Squires bass higher in the mix. Horn says he took singing lessons before embarking on the vocals, and while he is still not the strongest singer the Buggles vibe (and these were Buggles songs first) works for me. It's more evident than ever that Benoit David (singer of 2011 album) was following a guide vocal from Horn. The main let down remains Steve Howe's guitar. On the early parts he appears to be using a Stratocaster giving a very thin reedy sound, where his ES175 or something like that would have given a much more "Yes" sound. They could have worked that over as well surely and turned this into the last great Yes album.

In the end having now heard the most recent studio album Heaven & Earth I won't be back for more. Archival live albums certainly. Repeating the 7 shows from '72 box set with possibly the Union Tour or the "Ten True Summers" tour from 1979 where plenty of high quality bootlegs exist.

Pledge Music have taken responsibility for the whole download mess, and Geoff Downes has tweeted the bands apology. But given that it takes about 5 minutes to rip a CD to a FLAC or mp3 file why all the problems?

One question has to be why did Yes go the Pledge Music route, are they not marketable enough to make the release of the new album attractive to a label? Or is it as I would suspect the usual with Yes, shooting themselves in the foot by simply being bad at business.