My daughter (19) listens to at least as much music as I did at that age. There is a a subtle difference however. She doesn't care about it in the same way. Partly this is about availability, the quantity of the stuff and the ease with which it can be consumed, and that is the operative word, make music as much a disposable as a plastic water bottle. Music's ability to move the majority of people faded away sometime after the turn of the century. The arrival of cheap internet connections, and zero cost streaming made it possible to plug in your headphones and never hear the same song twice. The view out of the bus window, or at the gym turns into a video soundtracked by a revolving door of rap, r&b and pop/punk bands that will get their 15 minutes but not much more. If the daughter has a favourite band it is probably Green Day, but she spends most of her time with a background of vacuous production line dance, rap and pop that must gladden Simon Cowell's heart and leaves mine cold. 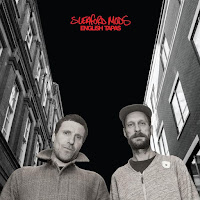 What brought this grump on? I had been aware of Sleaford Mods for a while, but discounted listening to them when Mojo anointed them the next big thing a few years ago. However I drifted past a video of them on Later recently and found I should be taking notice. Reading about their most recent album English Tapas it seems they were looking to move on musically and lyrically and they have. I can take or leave most of what's gone before but "B.H.S", "Army Nights" and "Stick In A Five And Go" all have something to say about the state we are in. I'm not the first to compare them to John Cooper Clarke but I'm listening to Beasley Street as I write this and remember the effect of this in 1980 and how it helped shaped my thoughts about politics. 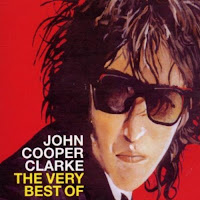 The fact that music doesn't shape thought and feelings as it used to is a loss, not only to the young folks who don't seem to have replaced it with anything else, but also to society which misses out on the prod to the conscience that politically aware music has given since "Strange Fruit" and “The Revolution Will Not Be Televised". That the most thought provoking current music is being made by two blokes in their forties and speaks more to me than my daughter is disheartening to say the least. Whatever your party colour, or lack of it, you are unlikely to feel that we are in a golden age of  political thought and action. The world needs to find a way to engage with my daughter's generation and music still has the potential to shift opinions and mould minds.


Yes I know, no Bob Dylan, CSNY, etc. While great songs they don't speak to me. For once I'm too young.