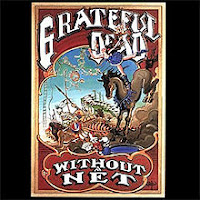 Every November for some years now the Grateful Dead have given away a free mp3 each day. there is a sort of competition attached to it for those who can identify every note the Dead ever played. Me I'll just collect the freebies thank you. 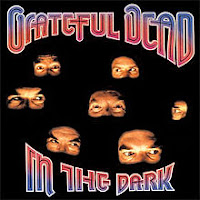 Writing this in November 2018 I have come to a realisation. I don't actually like the Grateful Dead much. What I do like are two Grateful Dead albums "Without A Net" a live album picked from shows in 1989 & 1990, and "In The Dark" their best selling 1987 album. Other than that I'm not bothered. Without a Net showcases the Dead's peerless ability to improvise, pushing Branford Marsalis hard on Eyes Of The World, and on the best moments of Franklin's Tower they manage to create a wall of sound that Spector would have envied, firing on all cylinders each in their own improvising bubble, while perfectly meshed together. The songs are shortish and sharp with the interminable Drums and Space segments cut out. There are enough of their best songs to make it pretty much a best of. The only songs I miss are Shakedown Street and Sugar Magnolias and maybe a couple of the songs from In The Dark. Speaking of which, it is really about four songs on that album, Touch of Grey, Hell In A Bucket, West LA Fadeaway and Throwing Stones. The rest are fairly disposable for me.

What makes the difference on these albums compared to the thousands of hours of recorded Dead that clogs up the internet? Brent Mydland. The Grateful Dead went through keyboard players the way Spinal Tap used up drummers. Brent replaced Keith Godchaux, strictly a piano player and sent the band off in new directions, ultimately bringing in digital synths, and samplers adding dense layers behind the guitars and textures that shifted the improvisations away from mundane soloing to a more collective sound.

When he passed away in July 1990 something went out. Bruce Hornsby and Vince Welnick who followed him were very much bolt on players rather than integrated into the fabric of the music as Brent was.

So The Grateful Dead; pointless noodling? Certainly. Self important? Definitely. some gold buried in the mountains of music? Seems like it.